Journal of Governance and Regulation: new issue is published 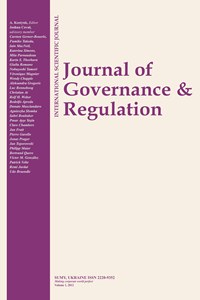 Dear readers, we are delighted to announce that next issue of the Journal of Governance and Regulation has been published.

The recent issue of the Journal of Governance and Regulation pays attention to issues of market CSR, public lending, audit and regulation etc. More detailed issues are given below.

Marilene Lorizio, Antonia Rosa Gurrieri analyse the quality of the expectations of a sample of resilient firms. The study leads to the hypothesis that the economic crisis is in line with a crisis of confidence in the judicial system. This is all the more serious when considering that this distrust is rooted in those firms located in Southern Italy, where the inefficiency of the judicial system is particularly pronounced.

Patricia Crifo, Antoine Rebérioux investigate the relationships between corporate governance and Corporate Social Responsibility (CSR). The underlying intuition is that governance factors are major determinants of CSR policies and extra-financial performance. More precisely, they identify three main factors that determine the strength of CSR engagement at the firm level: the structure of equity ownership (identity of shareholders), the composition and structure of board of directors, and the regulatory framework on corporate governance and CSR. The authors show how evolutions regarding corporate governance over the three previous decades have paved the way and shaped the rise of CSR.

Pran Boolaky and George Hooi propose a new paradigm on the adoption of IFRS in island economies specifically in the pacific region. The adapted Scott (2001) institutional pressure framework on IFRS adoption addresses the political independence and political dependence of pacific island economies at three levels namely high, second and low.

Tahmineh Rahmani, Nader Mirzadeh Koohshahi investigate whether referees are competence or not. In this article, at first, they study the principles governing the arbitration and the other part deals with the legal analysis of the position of judge in the Iranian legal system. Sankarshan Acharya offers some proposals on overhauling of Fannie and Freddie made by various pundits of systemic robbery amount to a gargantuan amount of public lending to private hedge funds and, hence, inefficient, unstable, unconstitutional and unanimously disagreeable.

C. Prince, A. de la Harpe, J. Cronje contribute new knowledge regarding the impact of management theory and approaches on the successful implementation of IT in the African Oil and Gas industry. The research shows that capabilities such as innovation and people competencies are growing in importance while IT leadership is becoming a critical role in supporting and delivering on the business objectives as enabler and transformational agent of business.

Eduardo Rivera Vicencio highlights the conformation of the monetary system and the introduction of the neoliberal model which brought about the private process and which started from the late seventies of the twentieth century and marked the turning point in the acceleration of wealth.