Home
About us
News

New issue of the Corporate Ownership and Control journal 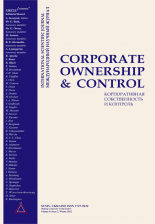 The full issue of the journal is available at the following link.

Francesca di Donato and Luciano Nieddu investigated if key performance indicators obtained from the financial statement are able to predict possible distress in a company. The study was accomplished on the basis of a sample of 100 Italian non-listed small-medium enterprises.

Carmen Gallucci, Rosalia Santulli, and Riccardo Tipaldi examined the effect of board gender diversity on a bank’s risk using a moderate multiple regression analysis on a dataset covering the years 2008-2017 and comprising 110 banks from Germany, Italy, Spain, and Switzerland.

Salvatore Ferri, Alberto Tron, Raffaele Fiume, and Gaetano Della Corte provided an empirical analysis of cash flow of several management areas and business performance on the basis of a sample of Italian listed companies in the 2008-2017 period.

Fabio Quarato, Marco Pini, and Edoardo Positano studied the role of digital technologies in international propensity of family firms based on a survey of 2,500 Italian firms carried out in 2015 by Italian Chambers of Commerce.

Ahmed Imran Hunjra, Tahar Tayachi, and Rashid Mehmood analyzed the impact of the ownership structure on risk-taking behavior of banks in emerging markets and found that international involvement in the finance industry reduces risk taking appetite

Fabio Fortuna, Mirella Ciaburri, Silvia Testarmata, and Riccardo Tiscini provided empirical evidence on the relationship between CSR disclosure and ownership structure. The analysis was conducted on the basis of a sample of 192 listed firms with reference to Italy.

Finally, Manuela Lucchese, Ferdinando Di Carlo, and Alberto Incollingo examined the relationship between the risk measures and the volatility of total comprehensive income, other comprehensive income (OCI), and single OCI components in the European context, using a sample of 166 listed banks selected from 15 European countries

We hope that reading this issue will be pleasant and informative for you!